What is Fabry Disease?

What is Fabry Disease?

Fabry Disease is one of several dozen Lysosomal Storage Disorders that interfere with the body’s ability to break down specific fatty substances. More information of such substances is easily found at essayelites.com.

Fabry affected are missing or lack sufficient alpha-galactosidase A (alpha-gal A) enzyme which results in sugars and fatty acids (Gb3) accumulating in the cells throughout the body and impairs the function of several major organs including the kidney and heart.

This can become a major problem in parts of the body that depend on small blood vessels, since the accumulation of substrate (Gb3) can clog the vessels.

The areas that are most affected by the closing of small blood vessels are the kidneys, heart, nervous system, skin and inner ear.

It is a very rare disease and because the rate of occurrence is less than 1 in 200,000 is considered one of the many “orphan” diseases.

The diagnosis of Fabry Disease in one family member may lead to the evaluation and diagnosis in other relatives, as Fabry is a defective gene in the X-chromosome. Men have an X and a Y-chromosome whereas women have two X-chromosomes making them less affected by fabry. But with this said, it's clear that women can suffer as hard from Fabry's as men can. They can suffer equally!

Fabry Disease is not strictly found in families - it can occur in affected that not nessesarely are related in anyway.

The way Fabry disease is inherited is by giving it on children.
Below shows two different scenarios. 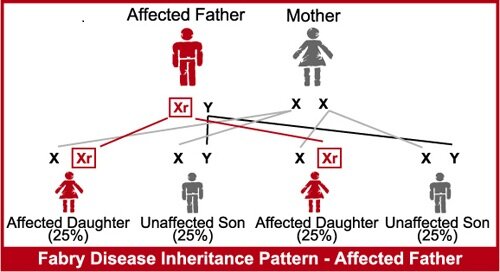 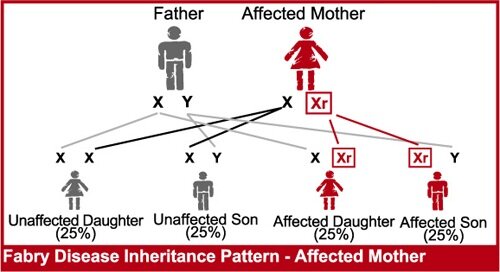 Get involved with The Fabry International Network!!
View our upcomming events!